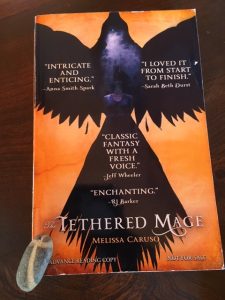 Raverran is a Renaissance-like city filled with canals, palaces, high fashion, and political intrigue. In the Raverran Empire, only a few people are born mage-marked, evidence they are gifted with strong magical powers. It’s not a gift anyone wants because it means you are forced to join the Falcon army where you are assigned to one Falconer who controls you for life. Zaira is a young mage-marked homeless girl who has the rare power to burn down whole cities. She has managed to escape being caught, but her luck runs out when she is accidentally captured and tied to shy Lady Amalia Cornaro, the daughter of one of the influential members of the ruling Council of Nine.

An uneasy alliance forms between the streetwise Zaira and the bookish Lady Amalia when they must work together to discover the traitor trying to start a war between Raverran and neighbouring Ardence.

The Tethered Mage is Book #1 in a trilogy taking place in a fantasy world of political backstabbing, spies, romance, and secrets, where it’s the heroines who lead the action and save the day. Books Two and Three, The Defiant Heir and The Unbound Empire, were equally successful in providing readers with exciting adventures.

The Raverran world introduces readers to a city that takes gender equality, same-sex marriage, and women in leadership roles as nothing out of the ordinary. I also appreciated the fact the book included three extras: a question and answer section with the author, Chapter 1 of The Defiant Heir, and the first chapter of another first book in a new trilogy from Orbit Books. I rate it a 4/5.

My one red flag is that the Orbit Books Advanced Reading Copy I read was already coming apart along the interior spine, so I had to be careful to ensure the pages didn’t start to fall out. Hopefully, that won’t be an issue with the final published copies.

Reviewed by Joy Llewellyn. If you’ve read Book #2 or #3, let me know what you thought by sending me an email to joyteenrebelseries.com.