Neverfell, a 14–year-old girl abandoned as a child, was found and raised by a master cheesemaker who lives in isolated caves far beneath the underground city of Caverna. The Cheesemaker refuses to let Neverfell leave the caves. He also insists she wears a mask to hide her hideous face from their very few visitors. But Neverfell escapes and heads to Caverna to search for the mother who left her to die. 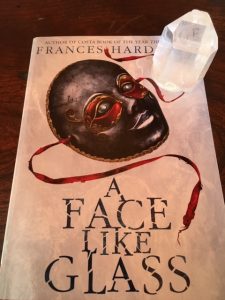 She isn’t prepared for the impact she has on all the people she meets until she sees her face in the mirror for the first time. Only then does she realize why she is a danger to the Caverna upper class.

Neverfell finds herself in a desperate race to track down her mother while also outwitting the assassins someone has hired to ensure she never succeeds in her quest.

I had read glowing reviews of award-winning The Lie Tree, an earlier Frances Hardinge’s novel. A Face Like Glass is her fifth book; two more have followed. I want to sing the praises of this novel! It was one of my favourite books of 2018 and has some of the most beautiful and descriptive visual and sensory writing I have read in a long time.

Read it, read it, read it. The story takes place in a unique world which Hardinge has presented in such a visual way that you can easily imagine the film version. I give it a 5+/5 rating.

Check out Hardinge’s website if you’ve got time: http://www.franceshardinge.com/

Please let me know if you hear of a movie being made. I wanted to dive in and write the script the moment I read the last page. Hmm, I wonder what actress could play Neverfell? Suggestions? Send them to me at joyteenrebelseries@gmail.com