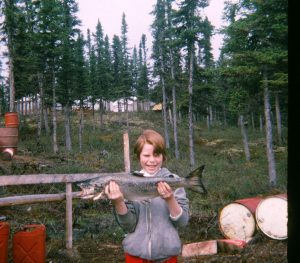 Holding the catch of the day

One of the black bears had left an almost perfect, paint-imprinted butt mark on my mattress.

After ripping off part of the plywood cabin wall, the two bears had sniffed out the single box left on the shelf beside the door. The box contained a can of spray paint my father had meant to put away in the locked aluminium shed last fall. As my parents, brother, and I surveyed the damage, my mother said she guessed one bear had bitten into the spray can and promptly covered the butt of the other animal with black paint. The sprayed animal must have backed up and leaned against my lower bunk bed, leaving a unique piece of backside art.

This kind of springtime arrival camp damage was nothing new. I spent the first 17 summers of my life at an isolated fly-fishing tourist camp owned by my parents in Northern Quebec, over 1000 kilometres north of Montreal on the Kaniapiskau River. There was no electricity, hot water, or flush toilets. We lived in cabins my parents had built, prepared meals using a propane fridge and stove, and used gas lanterns at night. Two or three times a month a bush plane would land on the lake bringing the all-important mailbag, a food order (given over the shortwave radio a week before by my mother), a new box of 12 books from the Montreal library, and a keen group of city fishermen.

That annual spring-and-fall family migration in and out of the bush planted in me a love of reading and a need to move on a regular basis. Exploring unfamiliar territory through travelling and writing became my way of engaging with the world and making sense of it.

Once I’d completed high school, I moved to Australia, working first as a governess on a sheep station and later stapling boxes and grading pineapples in Brisbane factories. I wandered the world for two years before settling down to study biology, having been convinced no-one could make a career out of writing.

This led to biology fieldwork on remote, fly-in only lakes in Northern Ontario, I moved to Yellowknife, Northwest Territories for five years then headed south (everything is south when you live in the NWT) and went back to school, majoring in Creative Writing at the University of Victoria.

Resting our weary feet after 500km

The year I graduated I met Evan, a fellow nomad. We’ve been together for over 32 years and, along with raising a family, have taken semi-regular travel sabbaticals, including backpacking around the world for a year with our children.

In-between the travelling I worked as a journalist and freelance writer until, 25 years ago, I moved into film and television screenwriting and story editing, along with teaching screenwriting in Mumbai, India, at the Vancouver Film School (VFS) for 18 years, and Shanghai University in China.

Evan and I are avid long-distant hikers. In 2011, we hiked for 1600km over 72 days on two Camino routes in France and Spain and have gone back to Europe to explore four more Caminos. 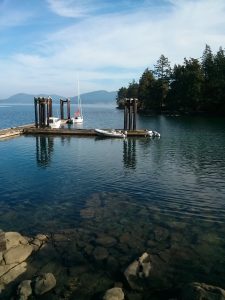 I’m planning on solo hiking the Portuguese and Ingles Caminos this spring to celebrate a special birthday.

We now live on a small island a 2-½ hour ferry ride from Vancouver, BC. We don’t have bears but there are lots of deer. These days I write young adult travel adventure novels, work as an Emergency Services volunteer, and daydream about my next hike.

According to Ernest Hemingway, gypsies believe the bear is our spirit brother because “he has the same body beneath his hide, because he drinks beer, because he enjoys music, and because he likes to dance.”

You and I are part of a small group who know they also like to paint.